History of Citizens for a Responsible Curriculum and John Garza

UPDATE, MAY 5, 2020:  It recently came to my attention that John Garza is the principal attorney bringing suit against Gov. Hogan in an attempt to block a recently-enacted law prohibiting licensed health care provisionals from practicing the discredited conversion or reparative therapies on minors. His co-counsel is the right-wing Liberty Counsel, run by Matt Staver.  The federal district court dismissed the claim, which is now on appeal.  See  https://www.leagle.com/decision/infdco20190802a06 .  Twenty states have such laws, and all efforts to block them in the courts have been rejected, including by at least three federal circuit courts of appeal.

A comprehensive history of the ultimately unsuccessful effort by Citizens for a Responsible Curriculum, whose President (and earlier, Vice President) and Legal Counsel was John Garza, to block progress on LGBTQ matters in MCPS, written in 2015, may be found at

These links from the decade of the battles in which Mr. Garza was the leader of the ultimately unsuccessful effort to block inclusion of the mainstream American medical and mental health professional association wisdom in the health education curriculum are instructive:

In addition, Bethesda Magazine published an instructive article by Eugene Meyer in its Sept./Oc. 2007 edition, discussing Mr. Garza and his organization, Citizens for a Responsible Curriculum.  As far as I can determine, it was never posted on-line, but below are the pages from the print edition, followed by links to a transcript of the News Talk program referenced several times in Mr. Meyer's article (and my comments on the article, sent to some of my Teachthefacts.org friends: 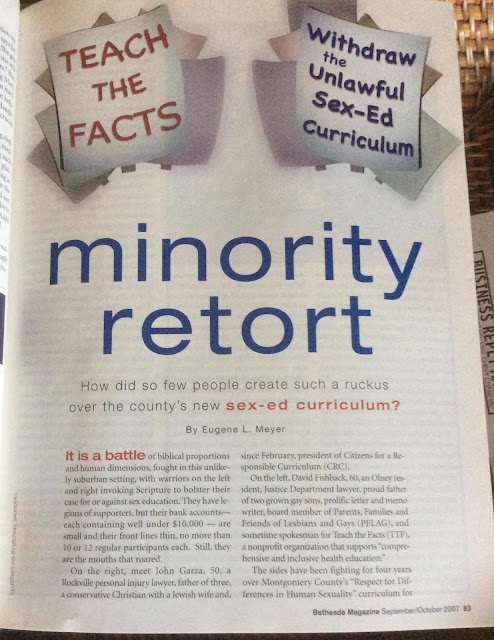 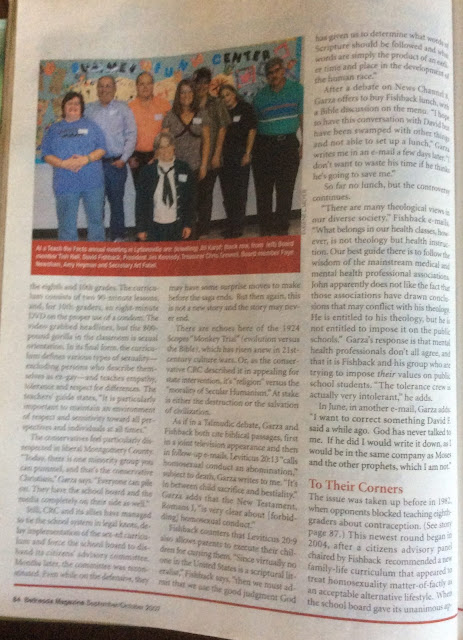 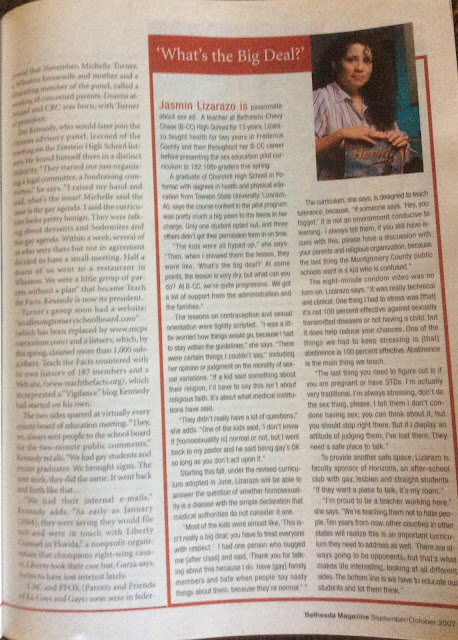 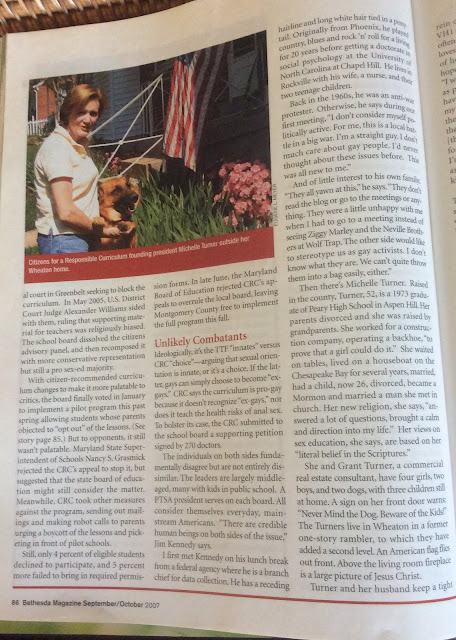 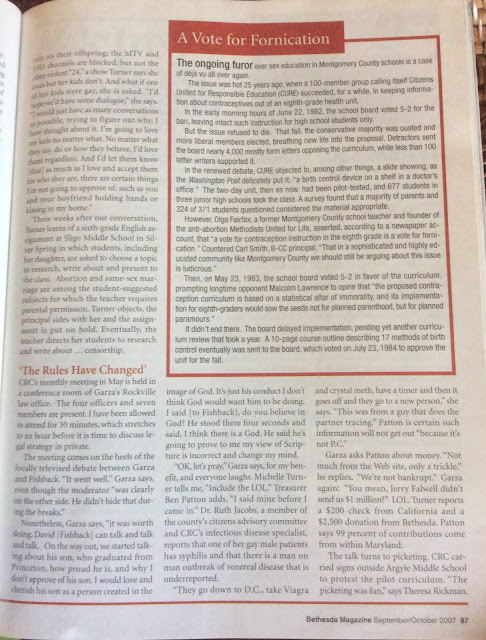 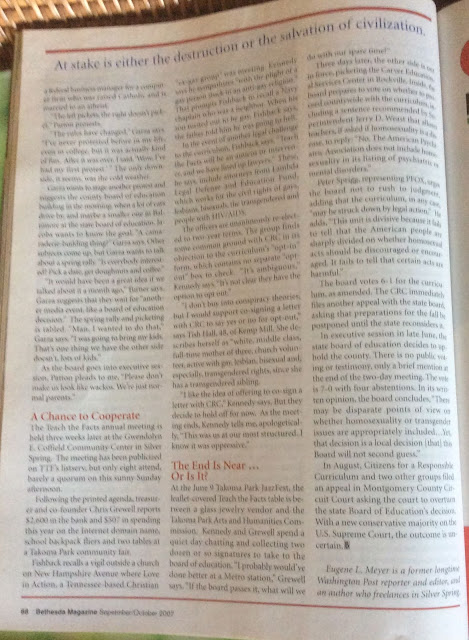 Here are links to the transcript of the New Talk discussion I had with John Garza in May 2007, courtesy of Teachthefacts.org, Jim Kennedy, and Chris Grewell.
http://vigilance.teachthefacts.org/2007/05/newstalk-transcript-first-part.html

Sent: Tue, 28 Aug 2007 12:21 pm
Subject: Bethesda Magazine
All:
On Sunday, the Sept/Oct. issue of Bethesda Magazine hit the newstands in Montgomery County.  In it, there is an article by Eugene Meyer entitled "Minority Retort:  How did so few people create such a ruckus over the county's new sex-ed curriculum?"   The article will not likely be on line until November, so I think there would be a serious copyright problems if it were to be posted on public web sites.  (The magazine is only 3 years old, and I suspect they would be very sensitive to such issues.  I know I would be were I its publisher.)

The article has a pretty accurate description, as far as it goes, of what has been going on the last few years.  I see a few errors, but none are significant to our litigation concerns.  If you are interested in the atmospherics, however, read on.

2.  John Garza is quoted as saying that I told him I am proud of my son who went to Princeton. A calumny. One of my sons went to Yale (and then Harvard Graduate School of Education), the other went to Penn -- Princeton's arch-rival. Should I demand a correction? :)

3.  The Scopes Trial was in 1925, not 1924.  1924 is only an interesting date for Washingtonians because it is the only year a Washington baseball team won the World Series.  Perhaps that is what Meyer was thinking about.

4.  Meyer also reports that Garza told him that he changed his mind about his suggestion that we have lunch and discuss our theological differences, saying that "I dont want to waste his time if he [Fishback] thinks he's going to save me." I found that curious, because I wrote to Garza saying I would be happy to continue our chat, as long as he did not think he was going to save ME. I have no illusions about changing John Garza's mind and heart, but it is always useful to learn other more about other people's perspectives.

5.  The article quotes Garza as e-mailing the following to Meyer:  “I want to correct something David F. said a while ago.  God has never talked to me.”   Here, in fact, is the direct quote from the e-mail I sent to Meyer describing our post-NewTalk chat on May 1 (which I cc’ed to Garza): “John told me after the program that he personally does not care what individuals do with their lives, but for him, ‘If God tells me to walk on the left side of the road, I walk on the left side of the road.’  (John, if I have that quote wrong, please correct me.)”

If Garza felt the need to clarify, fine.  But  he did not deny the quote and he did not have the courtesy to copy me with the e-mail.  Of course, this is typical of CRC tactics.  On March 29, 2007, I sent a letter to the State BOE in support of the MCPS decision and providing information on the AMA/AAP/APA positions on matters of sexual orientation – a letter I cc’ed to Garza.  Garza responded to Meyer,  but did not cc me.  I only found out about the letter several weeks later when it showed up on the CRC website.  I mentioned this to Garza after the NewsTalk show, and he blamed it on his secretary.  (This is lawyer talk for “the dog ate my homework.”)

Of course, the theological exchanges I had with Garza are irrelevant to the litigation issues.

6.  As interesting as the main article is, I would principally recommend reading the side-bar interview with a health education teacher at B-CC High School. I am glad we have such teachers.

Newer Post Older Post Home
Subscribe to: Post Comments (Atom)
David S. Fishback, a retired attorney for the U.S. Department of Justice, is Advocacy Chair for the Metro DC Chapter of PFLAG (Parents, Families, and Friends of Lesbians and Gays). His involvement in social justice efforts began as a college student in the 1960s, when he ran a tutoring program in Washington, DC. Following a year as a VISTA volunteer at a prison in Memphis, TN, he went to Harvard Law School and worked on Democratic Party reform issues.
After graduation, he joined the Office of General Counsel of the National Labor Relations Board. In 1983, David went to the Civil Division of the Department of Justice, where he litigated environmental tort matters, most notably the government's successful defense against lawsuits brought by asbestos product and Agent Orange manufacturers, who were seeking to shift their tort liability to the federal taxpayers.
In 1984, David became co-president of the PTA at a magnet integration primary school in Silver Spring, MD, beginning his efforts as an education activist in Montgomery County. He began advocating for LGBTQ youth in 2002 when he was appointed to the County Board of Education's Citizens Advisory Committee on sexuality education issues. During his time as chair of that committee and later through PFLAG, he was integrally involved in the ultimately successful effort to bring intelligent discussion of LGBTQ topics into the secondary school health curriculum and guidance offices.
A past member of the Temple Emanuel of Kensington MD Board of Trustees, David and his wife Bobbi co-founded and co-chaired (from 2002 to 2019) the Temple's Kulanu Committee for LGBTQ outreach. He is also a long-time member of the Temple's Social Action Council. In 2020, David was appointed to the Commission on Social Action of Reform Judaism.